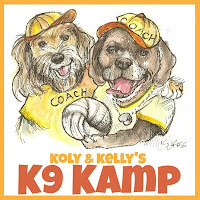 This week's K9 Kamp challenge is: Just One Doggone Minute to Win It as described here and here. Basically the idea is to sneak extra bits of cardio or whatever into your daily routine - e.g. do jumping jacks during a commercial break, or run up and down the stairs with your pup, etc. Since I'm trying to build on the prior weeks' challenges, my legs have been a little more sore than usual, so I decided to use my spare minutes this week mainly for stretching.

That's right - stretching.
I know that doesn't sound like much of a challenge, but I'm pretty lazy about stretching (especially since I've fallen out of my yoga routine), and since I'm married to Mr. Gumby-man who loves to stretch, I knew it would make him happy if I stretched more.

[Breaking news: While looking for an image of Gumby to include, I found out that the man who voiced Gumby died just four days ago. Huh. I'm showing my age to say I remember watching that show... I must have watched reruns tough, because I sure don't remember 1968. The article says, "though his voice always retained the tenor of a 10-year-old, he was 85." I bet the chicks at the nursing home were all over him.]

Anyway, my Mr. Gumby-man thinks the keys to health and happiness are drinking enough water and stretching. No matter what I say is wrong with me ("Honey, I have a headache/sore back/bleeding ulcer"), he will counter with "Did you drink enough water today and stretch?"

And, even though he's pretty bad about the first one himself, he stretches any time he has a spare minute. In front of the TV? He lays on the floor and does hip/leg stretches. Waiting in line for his chile-lime salmon burrito at Rubios? He stretches his arms. Walking the dog and she stops to sniff? He stretches his calf on the curb. 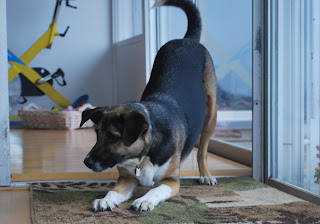 Also, Rita starts off every day with a little downward-facing dog, so I figured if I can't beat them, I'll join them. So: I stretched more in front of the TV; when Rita stopped to sniff on a walk, I stretched my calves; at the animal shelter this week, while the dogs ran around in the field, I stretched my quads. (Okay, I know I'm using the word stretch entirely too much in this post, but "I elongated, lengthened, or extended my quads"?? Nope, none of that sounds right.)


I also threw in some jumping jacks and squats here and there, just cuz I wasn't sure the stretching thing was going to "count." I don't want the K9 Kamp police in here busting me on a technicality. I am nothing if not a rule follower! We look forward to the final week's challenge, to be announced this Friday. I mean, not cuz we are looking forward to it being done - but because we are up to the challenge!

Final Four!
In other news, I mentioned last week that Mike's work was having a dodge ball tournament. Well, I'm happy to report that his team, Dodgy Style, has made it to the Final Four by defeating first the Dodgin' Devilicious Divas and then the DNAs (it's a biotech company - but DNA in this case = Deadly Ninja Assassins). The finals are Friday, so tonight and Thursday we'll be carbo-loading and then massaging/icing his firing arm.

There's even a video on YouTube with "highlights" of some of the action. It's long, so certainly don't feel obligated to watch the whole thing, but it's funny to check out some of the costumes and hits. The Dodgy Style team are wearing the tuxedo t-shirts (cuz it's dodgy style. Get it?). (The hubster briefly appears in a couple of background shots.)
My fave team is the people in the Mexican wrestling masks. I can't believe they played with them on! Seems like a detriment. But, hey, they look good and that's what's important.

I know you'll be on the edge of your seats waiting to hear if Mike brings home the trophy like he did last summer with the badminton tournament. Fingers crossed! (Fingers doubly-crossed for no injuries!!)


This is a blog hop 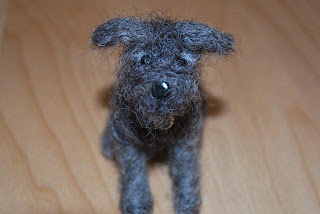