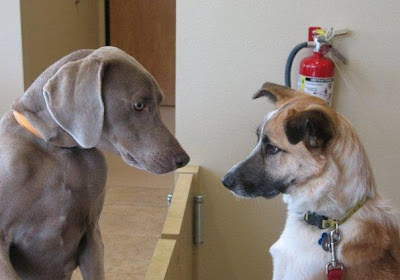 Dr. Vancil's dog, Hank, was at the cancer clinic again today. He came running out from the back to see Abby, all wiggly and excited. They are clearly in love, as evidenced in this photo, which is so cute I decided to make it LARGE. (Apparently Abby had Hank pinned when they were playing in the back after her treatment. I'm certain he was letting her win, since not only is he much bigger than her, he's got a spare leg!) Hopefully he'll be there again next time she goes.
[Dang. Abby just threw up. This same thing happened after her last treatment: as soon as I started writing on the blog, I had to take a break to go clean up. Maybe she doesn't like the blog?? Anyway, I'm thankful for the wood floors here at the new house, instead of carpet like the old place!]
Abby was supposed to have had a follow-up x-ray today, to see if that tiny spot on her lung had grown. Dr. Vancil and I talked about the pros and cons of taking the x-ray or waiting another 2 weeks. The thinking was that if the spot was obviously bigger, we'd possibly not have done her final treatment of carboplatin and switched to some other drug. He said ideally you want to re-xray 1 month to 6 weeks out, and we were just short of 1 month, so we decided to wait. I was worried that if we took it today, it would be hard to tell if it was clearly bigger or not. I think waiting was the right decision.
[Dang! She just threw up again. She's never thrown up twice, so, another first: I just gave her one of the nausea pills they gave me after her first session. Had to really coax her to take it with some peanut butter. Poor baby. She seems to be feeling a little puny.]
I told Dr. V. about how tired she was the few days after her last treatment, and he said that happens sometimes -- the dog will breeze through the first batch of treatments but by the 5th or 6th, the cumulative effect starts to hit them. [I guess that is what's happening with her and the nausea as well. Hopefully she'll eat her dinner after a bit...]
Dr. V. checked her out today and said her lungs and heart sound great. She's also maintaining her weight, which is good. They take blood every time she goes to see how her white count is doing (it's always been great), but last time they took extra blood and sent it out to the lab to make sure the chemo isn't messing with her liver and whatnot. He showed me the results they got back, and how all the indicators were basically ideal. He said she's very healthy . . . if only it weren't for that minor little cancer thing!

So, you all will just have to keep those positive thoughts coming for another 2 weeks until we get that x-ray. In the meantime, once she feels better, we'll have to do something to celebrate her final chemo! (At least, the final one for now...)
Posted by Jackie Bouchard at 5:32 PM